Looking for an Iorad alternative that works? Try Nickelled

Our quick guide to Iorad, and how Nickelled stacks up.

Check out what we discovered, including pricing details and a free trial.

Trusted by the best

Iorad is software after our hearts – a dead simple way to make interactive step-by-step tutorials for any website, without using software such as Powerpoint, Camtasia or Captivate.

As a webapp, there’s a ton to love about this software, and after launching on HackerNews in 2012 (you can still see the launch announcement here!) we’re delighted to see that the business seems to have come on leaps and bounds, claiming 7,000 users globally.

It compares positively to Nickelled in a lot of ways, although there are some fairly major gotchas in the playback/creation experience which will restrict its user base considerably.

Iorad has some pretty impressive functionality that marks it out from a lot of user onboarding software (think Appcues, WalkMe etc). Some of our favorites include:

This is a feature we don’t see often enough. What should you do when you’re recording a screencast and realize you’ve included some private information on there? With most software, you’d need to start over, but Iorad offers the ability to mask information fairly easily, which will no doubt prove popular with a lot of users.

All paid plans allow you to export natty PDF docs from Iorad tutorials (yes, this is standard on Nickelled too!), which makes it very suited to those producing training within organizations which will probably have varied learning needs. If you need even more, we’re told Iorad’s Enterprise Plan allows exports to HTML, SCORM, Word and Video – as a point of comparison, Nickelled allows HTML and Word exports on all plans.

If you read the Hacker News post above, you’ll know that Iorad’s founder was initially not that keen to include voice recording, but it looks like he changed his mind. Voiceovers are available, and even cooler, you can generate audio using text-to-speech functionality (if you’ve typed your prompts and also want them read). It’s pretty neat.

Iorad’s listed on the Slack app store, which is pretty cool – it allows you to dump full instructions directly into Slack, so colleagues can follow guides without even leaving the app.

We suspect that this will be a curse rather than a blessing for most users, because these integrations are only available on extremely expensive Iorad packages… But they are there, if you need them (and can afford them!). 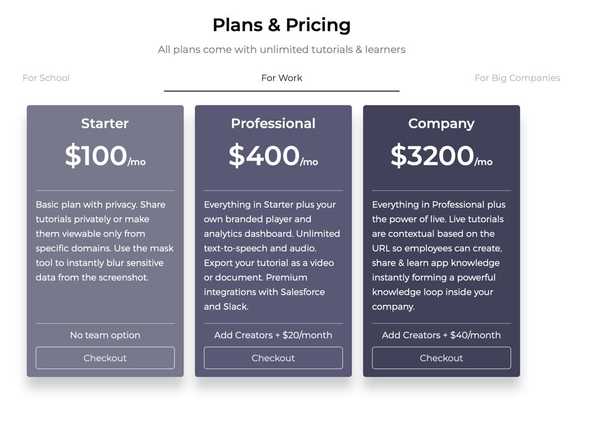 There’s some clever stuff going on on Iorad’s pricing page, so let’s break it down a bit.

Unlike most in the market, Iorad offers a free tier, which is to be commended – it’s a dead simple way to get to know the software and find out whether it’s right for your use case.

However, for most businesses, a paid plan will be required, because Iorad guides created using the free tier are always public – so beware if you’re building one using company software that’s not meant to be seen externally!

Paid plans start from $100/month for one user (no team option), and it’s a fairly basic package. If you’re looking for something with more features such as viewing permissions, team collaboration (multiple users), company branding and analytics, you’ll be looking at forking out $400 per month, which makes Iorad significantly more expensive than the $199 base package of Nickelled, which includes all of these features.

Is there a catch?

If you need to include LIVE walkthroughs (i.e. those which actually open over the site, you’ll be looking at the company plan, which comes in at an EXTREMELY hefty $3200 per month (yes, you read that right).

This is a serious amount of money for most companies, and it will rule out Iorad for many use cases, which is a bit of a shame. There’s no doubt that $3.2k/mo pushes Iorad into Bigco pricing, and it’s even comparable to some quotes we’ve heard from WalkMe (an enterprise specialist and probably the market leader).

Companies who need bespoke features such as single signon, tracking and completion and a dedicated domain will require an unlisted ‘enterprise’ package, which we can only assume is more expensive…

That said, there’s another honorable mention here for Iorad – they make clear throughout the site that pricing is a) negotiable and b) variable for educational institutions, which we really like.

Installing the software to capture on a desktop was pretty easy and very similar to the way that you would install software for other software packages like Adobe Captivate.

Once the plugin is installed, you can fairly easily select what you want to capture – it appears to support most native apps, which is impressive.

We found it to be a little bit buggy in the same way that Adobe Captivate was, also seeming to struggle to pick up different windows on the desktop.

Unfortunately, Iorad also gave some strange bugs and general crashes – for inexplicable reasons we actually had to use force quit to get the app to work properly after installation.

That said, once we got it working, it seemed to capture everything fairly well. 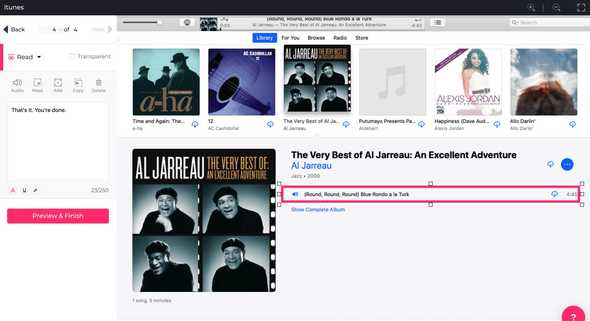 We managed to create a tutorial In Apple iTunes, which is not particularly easy to use piece of software – Iorad managed to correctly label everything that we had clicked and automatically labeled and delineated the steps that we wanted to follow.

It also put really accurate bounding boxes around the steps and identified bits of text that we had clicked on.

Once you have finished editing the guide, You can save it with a custom title – your options are either to play it from a link, or to embed it onto a different pages using JavaScript.

Like all Iorad guides, the options when you open the guide are:

Using Iorad with Google Chrome was very easy to do, although unlike Nickelled, you will need to install an extension. If you need a truly software free experience, Iorad isn't it.

When you click the extension, the Iorad options launch, and you can immediately create a tutorial from that point. 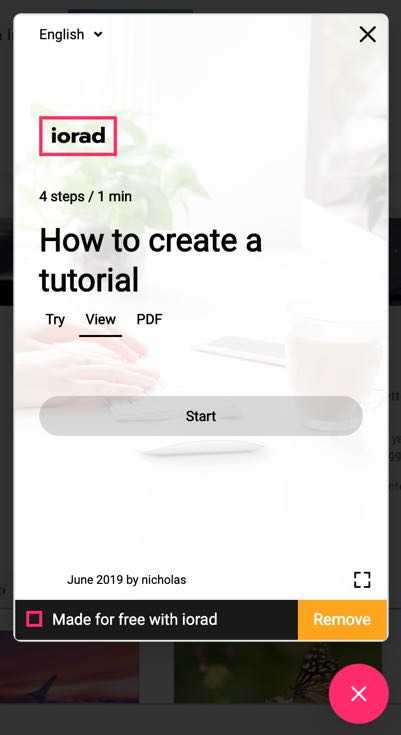 The Chrome extension feels more solid than the desktop browser – it was able to record clicks that I took through a site, although it wasn't able to capture switching sides, which will make it less suitable for any workflow that requires multiple apps.

When you're done, you click the extension again, click done and you're able to go and edit your tutorial on the Iorad website, which feels very similar to editing a desktop recording as well.

It's also possible to go back and add new steps to the guided tour, in much the same way that it's possible using Nickelled – this puts both pieces of software streets ahead of the competition.

One option that is available using the Chrome-based tool is a live mode, which allows the learner to actually follow the steps live on the website, clicking through themselves rather than just clicking forward and backwards.

The problem with this, as we've mentioned before at Nickelled, is often that for whatever reason, the elements may not be on the website – Ioad tries to get around this is by showing a message to say that the items are not found on the page.

As far as it goes, this is an OK solution, but it's likely to become very brittle when using a complicated web app.

Another problem is that to playback guides that are live on the website, your users will require that the Iorad extension is installed – that probably makes it limiting for anyone with a large user base, or anyone who will face problems with user engagement If they require the installation of an extension for all users (user onboarding, therefore, isn't a great use case for Iorad). 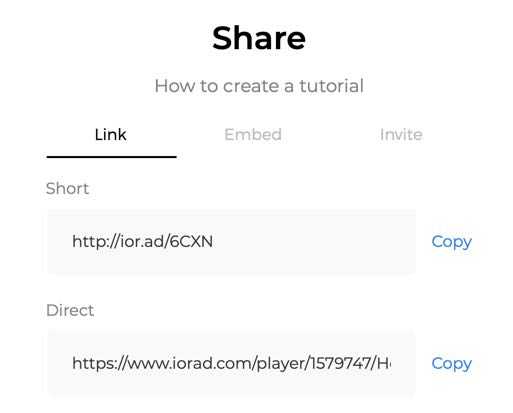 Similar to a desktop guide, once you've saved your work, you can access it using a URL or you can embed it on your website.

Overall, it feels like a very solid creation experience – there aren't as many bugs as there were with many other pieces of software that we tried on the market. It feels very well made, very well designed, and something that would not be frustrating to us over a long period of time, which is quite impressive considering the complexity of the software.

Iorad is a smart tutorial builder, which seems to have built a broad customer base through an excellent user experience, commendable pricing transparency, and iterating their way to a strong product.

For companies who are looking for something with which to replace training videos, it’s a superb choice – our main bug bear is with pricing of the mid-tier feature set, which will make it unaffordable for many.

In our opinion, Nickelled (of course!), offers a comparable feature set at a lower price point and may be a better solution for those who are keen to make the switch to website tutorials.

Your mileage of both tools may vary of course – but you can start a free trial of them both using the links below. Good luck!

Recommended alternatives to Iorad, with suggested use cases and pricing: