Psst! 4,000+ Companies can't be wrong. You can teach your users anything with Nickelled.

Whether you’re trying to increase retention, improve onboarding or decrease churn, in-app messaging has become a standard for most SaaS businesses.

It’s not difficult to see why — highly-targeted, behaviour-driven messaging was the holy grail of customer service teams for decades and the advent of solutions such as Intercom and Customer.io has changed the way modern businesses communicate.

In our experience most SaaS businesses fail to fully capitalize on in-app messaging services, setting up basic onboarding and retention campaigns and often going no further.

Very often there is plenty of room to use in-app messaging to tackle other business issues — sometimes even more effectively than solutions which have been designed specifically for that purpose.

When customers' cards fail, you’ll normally deal with them through your awesome dunning provider (think Stunning or ChurnBuster).

But have you ever checked the open rate of the emails that they’re sending? You may be surprised to learn how low it is — even if you have SPF and DKIM set up on your dunning provider, many emails simply won’t be read.

For one of our users, a quick analysis of the last 30 dunning emails they had sent revealed that three (3!) had been opened. Even though they'd send multiple emails, that’s a pretty terrible response rate. And remember, these weren't marketing emails — these were business-critical emails to tell users that their account was about to be suspended.

So, they decided to hook up Intercom to Stripe, and send a notification to the customer through Intercom as well as the dunning solution. The result?

A staggering 73% of customers opened the message. 41% went on to update their card — far higher than the numbers who would update when the email was sent from the dunning provider. 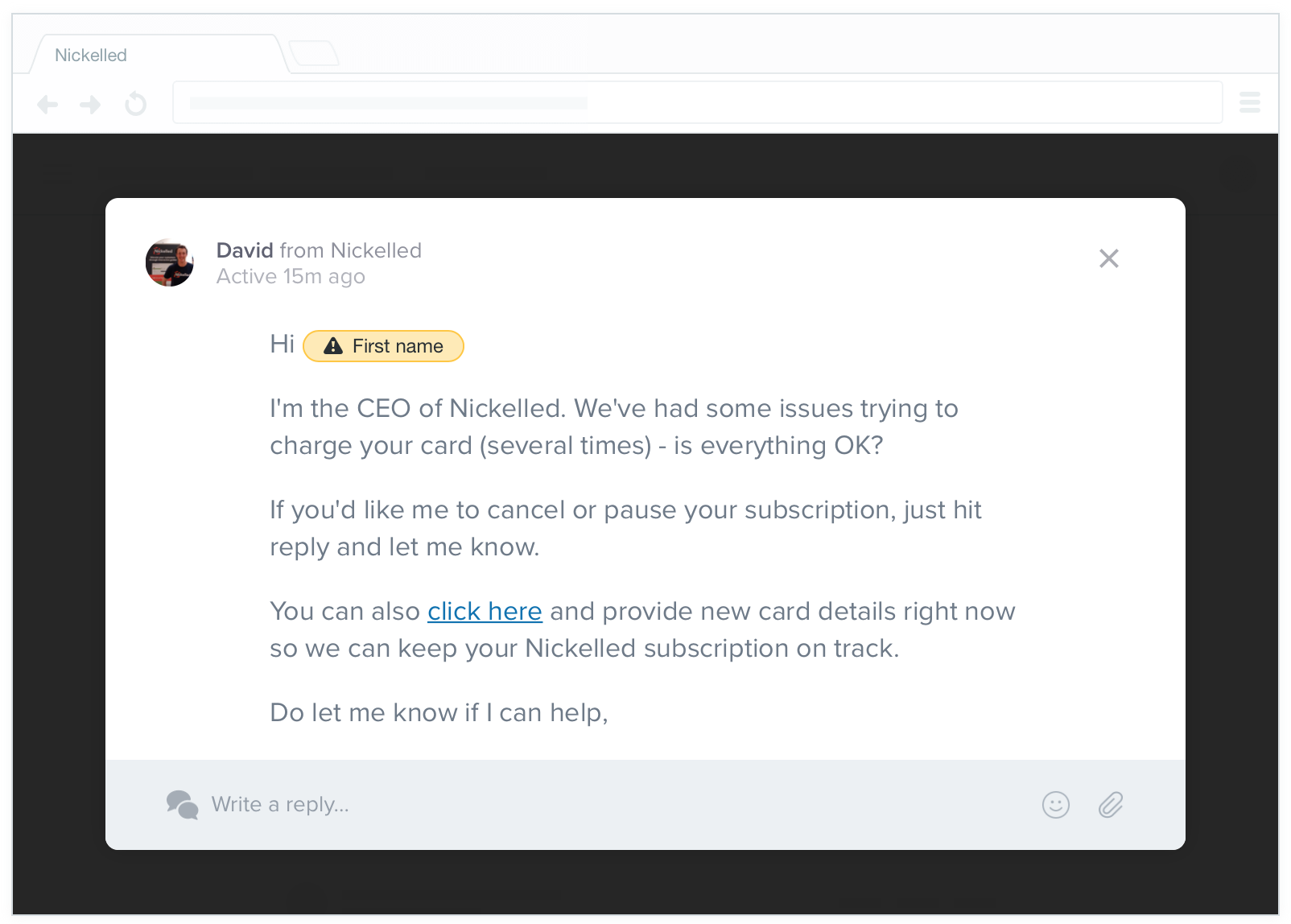 Many businesses consider free trials as ‘set it and forget it’ — if a user doesn’t convert at the end of the their trial, consider it an unsuccessful one and move onto another customer.

Sure, you may send an upgrade prompt over email, but here’s the kicker: In-app messaging has a far higher action rate than emails do. According to Intercom, a good email open rate is over 20%, while an in-app message should be seen by over 90% of users.

So it makes sense to warn users of their trial coming to an end inside your app rather than over email, if possible. Not least because statistically, you’ll probably need to send two to three emails to ensure they are likely to have been read, while you may only need to send one or two in-app messages.

In addition, there are several conceivable cases in which a customer may be happy with the service but not convert at the time that they receive an email — for example, if they don’t have time, or they have a long approval cycle, or they happen to be on vacation when the trial expires.

And do you send more than one post-trial email asking for the conversion? No? Thought not.

In these scenarios, the customer may have converted had they been reached at the right time — so a well-timed message when the customer is nearing a functional limit of their free trial is likely to increase the conversion rate.

Consider using in-app messages to offer upgrade prompts well before the end of the trial (or the upgrade point, in the case of freemium). For example:

If customers are going to cancel, you should be asking them why.

This is easy to do with in-app messages, and it has the added bonus of giving you an extra chance to ‘save’ the customer — something you don’t get if you follow up with an email post-cancellation.

A strategically positioned message from the founder on a cancellation request page, for instance, may allow more direct communications with dissatisfied users. Give a pissed-off consumer a chance to reconsider and a direct line to the CEO, and you’ll be surprised how often they’ll change their mind. 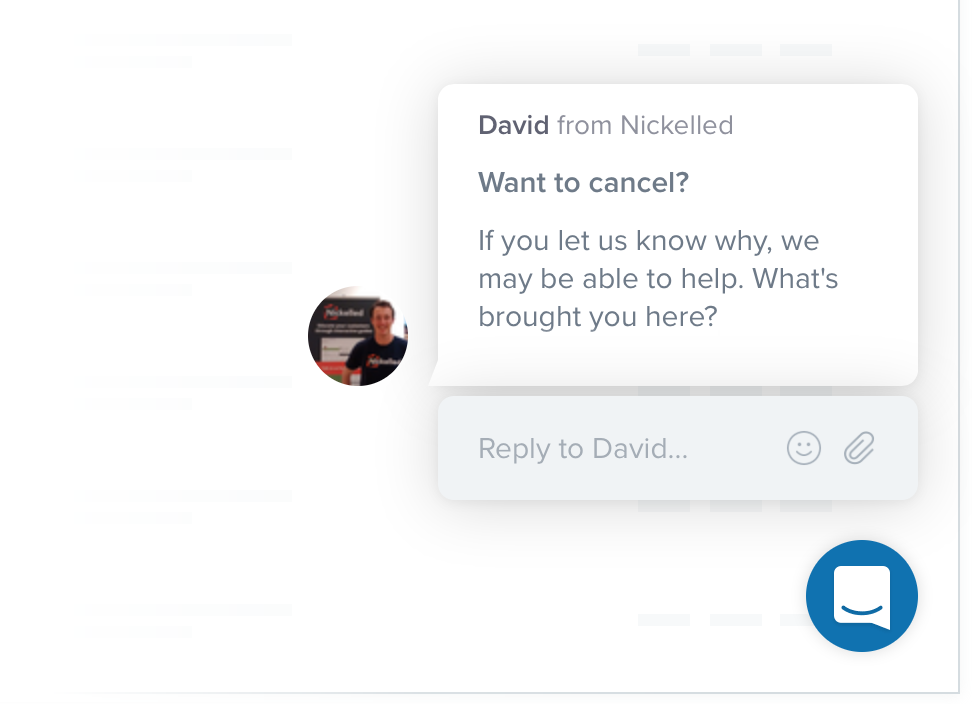 One particularly effective tactic here is to add an incentive to stay — use the in-app message opening as an ad for a reduction in pricing if the consumer decides to stay. You will want to be judicious in your use of this (perhaps base on prior engagement, to make sure that not everybody is given a superb deal just for visiting a specific page), but it’s a useful carrot which will help save your most valuable users.

By ensuring you’re passing these details into your in-app communications platform, you can facilitate some sharing by your happiest customers.

Chances are, if they’ve been with you for a while and really derive value from what you do, they won’t mind being asked for a little word of mouth.

You can do this in two ways — the simplest is to embed social sharing buttons (or some other sharing mechanism) in the message itself, and rely on the user to share across their own networks.

While this approach is great for businesses that benefit from a significant network effect, it may be less effective for a B2B play. Here, a smarter approach is to send a customized message asking the user if they can think of any business associates who may also benefit from your service. The approach requires more effort, but it also increases the chances of your customer being invested in to the referral working out — making it easier for you to call on them again for help along the way.

We’re not claiming this is an exhaustive list of in-app interactions – we’d love your feedback, and any more additions you may have. Drop us a note in the comments or reach out @nickelledappon Twitter.

Millions of users have learned with Nickelled. Why aren't yours among them?