If you’re in the UK, odds are you’ve heard of Gumtree. Gumtree is the UK’s largest website for local community classifieds. With around 8 million monthly unique visitors and nearly one-fifth of the UK on Gumtree, it’s one of the most visited sites in the UK. That makes it the go-to place for anything from selling a couch, finding a new roommate or adopting a puppy.

But supporting such a diverse user base with a broad range of web savvy, skills and scenarios was a demanding task, and Gumtree’s support team was struggling to keep up.

The Problem? Too Many Repetitive Support Requests

Gumtree doesn’t have a consistent stream of regular visitors, like say, a news site or a social media platform. When existing users log back in, or when new users create an account, they come with a transactional intent: either to buy or sell.

Whether the user creates a new listing or purchase a service, these transactions are often ‘one-and-done’ deals. They won’t be back until the next transaction, which for some users, is years later.

That means they’re also not too eager out to reach out to customer support to get help navigating the platform. After all, they don’t intend to be here for long.

At the time, the constant flow of new and infrequent users was a problem for Gumtree’s support team too. They found themselves spending lots of time answering the same questions and explaining the same processes over and over again.

Though Gumtree was getting tens of thousands of support requests a month, many of the requests were basic and largely predictable:

What’s worse? Many of their least web savvy users were driving up their phone support costs with these mundane help requests - which was also Gumtree’s most expensive support channel.

Gumtree’s support team hypothesized that if their very prominent FAQ page was still leading to phone support calls, it was their FAQ page that needed attention.

Here’s what they did.

Gumtree created step-by-step guides for their most frequently asked questions and distributed them across three channels: 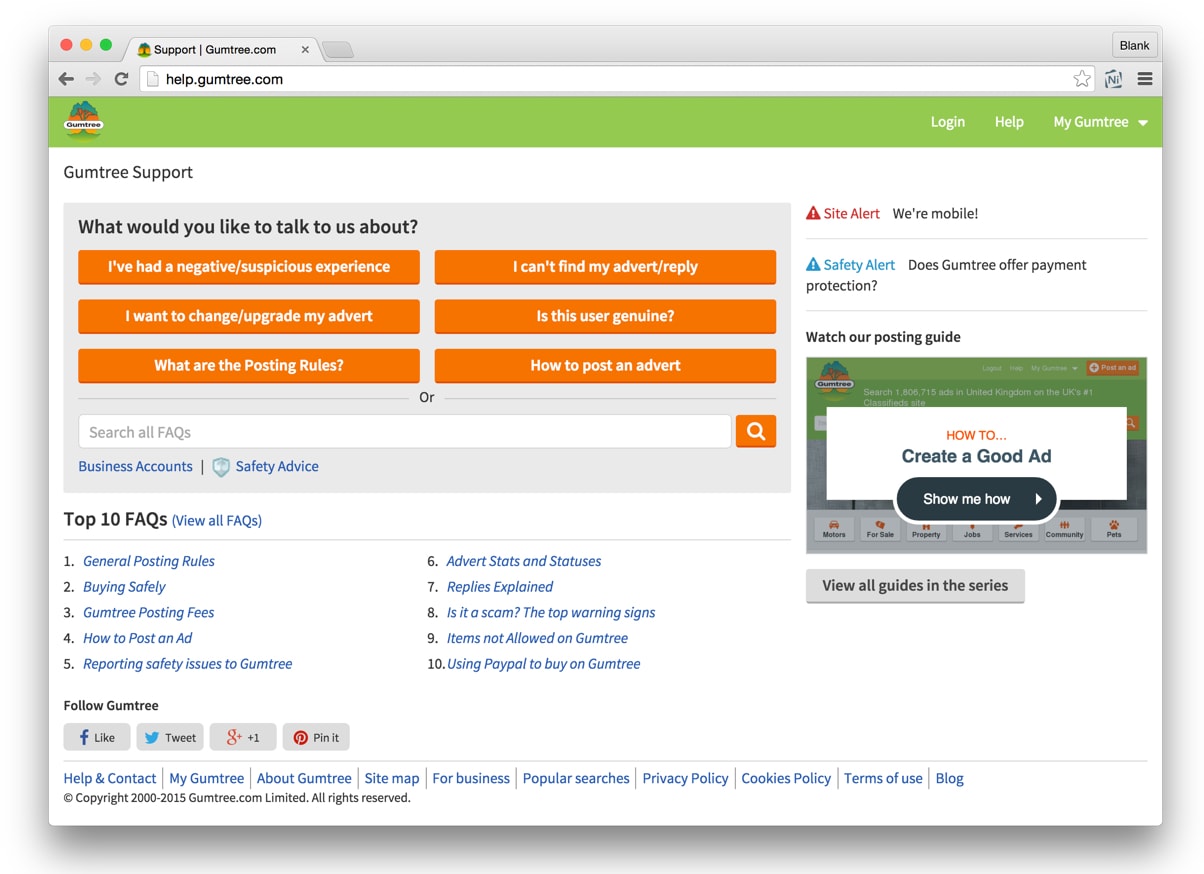 What was the effect of offering up Nickelled guides across the user journey combined with the support team nudging customers with links back to the FAQ section?

Customers were able to solve their questions online instead of calling in for personal support - and it turns out they liked it that way too. With an 88% customer satisfaction score, customers who were going through guides were rating their support experience around 10% higher compared to other support channels.

In other words, Gumtree could replace much of their expensive 1-to-1 phone support with NIckelled’s clear, visual tutorials and still come out on top.

That made a significant difference to Gumtree’s own bottom line: they saw a 470% ROI after adding Nickelled guides to their customer support arsenal.

Today, Nickelled guides handle nearly one-third of their support requests, which frees up the support team’s time to improve their overall user experience.

“Now when a customer really needs our personal support, we have the time and the bandwidth to help them,” says Todd.