Sign up for a free trial today to discover more about how Nickelled has changed tutorial software for the better!

Trusted by the best

Interactive tutorials are a great way to help users to learn new skills and master new software by allowing them to follow along with a step-by-step process on the screen.

However, picking the right tutorial software can be a tricky business - there are so many out there, so which type will work for you?

What is tutorial software?

Tutorial software allows you to create interactive learning tools which help people to learn. Typically, tutorial software can create step-by-step "guides" which highlight areas of the screen, so that the user can follow along and understand the process better.

It's important to be aware of the limitations of your operating system – not all software works on all systems.

Broadly speaking, you'll be looking at three different categories – two are native (i.e. must be installed), one runs from the cloud:

On that final category, a word of advice.

Cloud-based tutorial maker software runs inside a browser, which means it can't capture tutorials outside of the browser.

So, for example, if you want to record a tutorial of a piece of software such as Oracle, which must be installed and runs natively on the computer, cloud-based software won't work. You'll have to use a native screen recorder.

That said, if you want to record a tutorial of a cloud-based tool such as Salesforce, Workday or Dropbox, a cloud-based tutorial creator will work just fine for you, as all of the activity happens inside the browser.

To find out more about our award-winning tutorial creation tool (and to build your tutorial in under 60 seconds), click here.

Otherwise, read on to find out about each of those steps…

How Interactive Should It Be?

Interactivity is something of a spectrum – ranging from users thumbing through a PDF file of screenshots (not very interactive!) to watching video tutorials (somewhat interactive) to actually being immersed in the app itself and being taken through the process live.

Clearly, the learning outcomes increase the further towards the interactive end you proceed – would you rather learn by looking at pictures, or by clicking the mouse and by doing it yourself inside the app?

However, there are tradeoffs in fully interactive guides.

It's harder to control a curriculum, for example, and some effects won't be available (see the next section). You'll need to decide which format best suits the process that you are trying to illustrate, based on the capability and attention span of your audience, as well as the context that you'll be delivering in.

This diagram showcases the increasing level of interactivity in popular tutorial software packages: 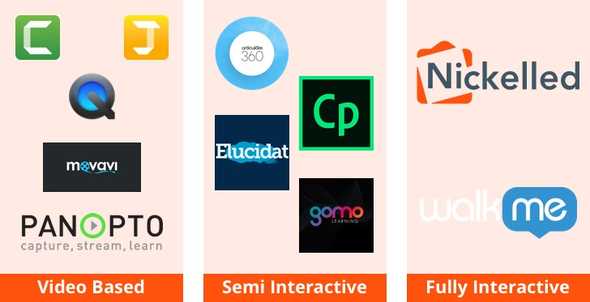 Your choices will also be determined by exactly what you're trying to show in your tutorial. Common things to include are:

As you can see, there are a lot of bells and whistles that can be added to a tutorial. Here's the rub though – generally speaking, the more extras you add, the less interactivity you'll have.

At the screen recorder end of the tutorial spectrum, you're essentially creating a video tutorial, where all the user can do is play, pause, fast forward and rewind. That makes it very easy to add effects such as voiceovers.

However, an interactive tutorial allows a user to click forwards at their own pace, perhaps take different paths, and experience an application as if they're really inside it.

Obviously, this is a more technologically advanced solution, but it means effects such as voiceovers are much harder to add, because they may end up being in the wrong place (or, depending on the path that the user chooses, not there at all).

So think hard about the additions you want to add to your tutorial.

Based on our experience, it may be that they're not as necessary as you think.

How Will You Deliver?

Once you've recorded your tutorial, you'll need to deliver it. Some packages make this easier than others - a software tool such as Adobe Captivate, for instance, packages up screen recordings into neat elearning modules that can be easily dropped into an LMS for playback.

A cheaper software package (or a free one such as Quicktime for Mac OS X) might only output a .mov file, leaving you to worry about where to host it, how to ensure it's been completed, and how to restrict access to the right people.

At the most basic level, make sure that you can effectively embed the output of any tutorial maker you choose, whether it's interactive tutorial software or tutorial video software.

In 90 percent of the cases we see, organizations end up managing curriculums independently from the tutorials themselves, and almost all LMS systems support embedding videos or walkthroughs as part of a curriculum that they manage.

Side note: Don't just throw your tutorial videos up on YouTube… It's a security risk, even if you use the unlisted option. Use a video content management system!

Of course, you may be delivering your tutorials in a completely different way, and not as part of a structured curriculum.

You'll need to ask any software vendor about their capabilities here too – interactive tutorial software often comes with Javascript snippets, which you can drop into an app to launch the tutorial right from the page itself. Or you may choose to offer a popup with a tutorial video for new users. Both of these can be considered "in-app" launch options, but they're not the only ones.

Remember that every user needs to be able to play your video tutorials, so avoid using proprietary video formats that some browsers can't handle. CanIUse.com is an excellent resource for checking the compatibility of your website features – here's their page for video playback so you can check.

How to launch tutorials from within an app, with Nickelled CEO, David Batey

The most useful way to deliver a user a tutorial is, of course, to show it to them at the point where they need it most. Interactive tutorial builders are great at this – using Javascript or other languages, it's possible to add rules such as:

Implementing tutorials with logic like this transforms the way that you deliver help, even as it shifts you away from a formalized learning curriculum. In our books, 'on-demand' help offers a far better user experience, as not everybody learn at the same pace, although we fully accept that's it's not for everybody.

Even within the parameters of the rule examples above, it's worth considering how you want your tutorials to appear. Some organizations choose to launch tutorials over live pages, which is a nice effect for users (who can complete their work as they view the tutorial) but nightmarish to maintain (what happen to the tutorial when a user goes off-course?).

A more stable solution is to record the tutorial and then play it back over the top of the site, showing the user what to do but returning them to the live page when they're finished or if they click cancel. See an example of this kind of tutorial in action here.

Even videos, the most basic kind of tutorial, can be launched within an app, thanks to the embed functionality available with most video hosts (YouTube, Vimeo and Wistia all support this).

In case you're wondering how important this step is, we'll offer the final words here to Panopto:

A recent survey conducted by Panopto and YouGov revealed that, on average, employees waste 5 hours a week just waiting to get some bit of knowledge from a coworker who can’t be reached, or blindly forging ahead to try and find that knowledge elsewhere. For larger companies, that translates into about $3 million in productivity lost each year for every 1,000 employees on your team.

Which Software Is Right?

Below, we've built a fairly comprehensive list of the best tutorial creation software packages on the market. There are a lot, so if you don't want to get overwhelmed, we strongly recommend reading the guide above and figuring out what you need before diving in!

These software providers offer cloud-based tutorials which can be embedded inside an app for a fully interactive tutorial experience. All offer strong analytics features, with customizable, rules-based launcher options.

Cloud-based tutorial creator tool that records webpages and can be embedded within an app.

These software providers output click-to-proceed elearning modules, which have some level of interactivity. They often support non-cloud software and can be embedded into LMS systems easily - all should be SCORM-compliant.

Articulate Storyline: The other 'big beast' of this category, with features roughly comparable to those of Adobe Captivate. Lacks Adobe's Creative Cloud integration, which may be useful for some users. Another big drawback is that it's PC-only.

Elucidat: Screen capture and elearning creation tool designed for learning professionals who want to create slick exportable elearning modules. Slightly easier to use than the other tools in the market, and with a full analytics suite comparable to cloud-based tools.

These software providers specialize in screen recording software, which can be used to create tutorial videos. They tend not to be interactive, but may be uploaded to video hosting sites such as YouTube or Vimeo (or hosted on an intranet).

Camtasia: A widely used screen recorder solution, which is well-supported and regularly updated. Includes plenty of post-production effects, such as text overlays, transitions and other animations. Recommended for video tutorials.

Quicktime: Apple's native screen capture solution. Doesn't include many features, but is bundled free on all Macs. A strong starting point if you're trying to figure out whether video-based tutorials will work for you.

Movavi: Available for Mac and Windows and a popular screen capture solution. Extensive effects library available at extra costs – for most users, Camtasia may be a better solution.

Customer onboarding is a learning process, and we’d love to learn with you. We make simple guides to onboard and convert every user, with zero website changes required.

Our guided tours feel "real" – they're interactive, self-paced, completely immersive and yet still as easy to play as video tutorials.

To create a Nickelled guide today, with no code installation or software downloads click below.

At the end of the process, simply create a no-obligation account and we’ll be in touch to talk about how you can revolutionize client onboarding in your company.